Check the latest news updates from all over the world. Without much of the time dissipated you can check out the important news updates from tenOclocks.We have brought up you the best news collected from all over the world. So quickly you can brush up with the daily news when you are too busy to switch on your electronics equipment and spend a part of our time on it.

A day after Trump’s defeat, he was seen his golf course on Sunday.that the. Joe Biden will be the 46th President of the United States, according to race calls by news agency Associated Press as well as other major newscasters. The 77-year-old Democratic nominee Joe Biden who stand remarkably in gaining trusts among the voters have beaten out Republican Donald Trump to become the.

With the win and to make his policy effective, Biden has planned for executive actions that would undo Trump’s policies. As per the team sayings US President-elect Joe Biden is to make tackling the coronavirus pandemic his top priority following his win over Donald Trump.

Arnab Goswami, praying for his life 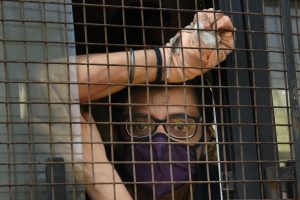 What a shame Maharastra government! A correct pictorial of Mislead and misuse of powers. Arnab Goswami was dragged and taken to the Judicial custody, where he was not even allowed to meet his lawyer. The pressure of the Maharastra government and the senior officers have landed him into much trouble . A video got circulated in which he was seen shouting and requesting on the camera to help him from the extreme atrocity being carried out by the Maharastra Police.Protests from all states of India were seen where people came out fro Arnab’s justice.

Case: Republic TV owner and editor-in-chief Arnab Goswami were on Wednesday arrested by Maharashtra Police in connection with a 2018 suicide case. In 2018, an architect and his mother died by suicide over alleged non-payment of dues by Goswami’s Republic TV, a police official said.

“Never give up on what you really want to do. The person with big dreams is more powerful than one with all the facts.”