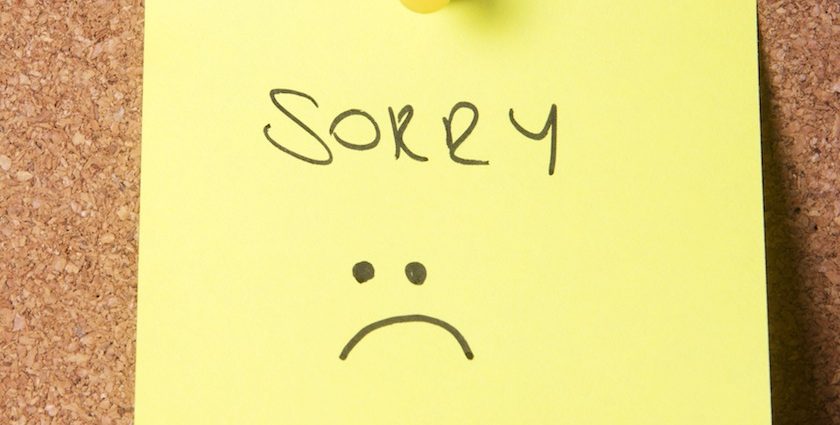 Apology and excuse, the two words never to be muffled.

By: Anupriya K
In: Entertainment, In our opinion
Spread the love

Excuse : Several Excuses Are Always Less Convincing Than One

Aldous Huxley gave the world these marvelous words in ‘Point Counter Point’ of 1928. Apology and excuse though synonymous should never be mixed together. They are poles apart. An apology is asking forgiveness for your mistake while excuse is giving a reason to avoid being framed in a negative opinion. Apologies are always meant to be given but excuses only once or twice, more than that doesn’t give a good impression.

In life, we all come across moments where we have to justify our actions or words. Sometimes we don’t get the chance and we get misjudged for it. Human life runs in harmony, trust, and love. Sometimes to protect them we may do something which may or may not be legal. In such situations, apologies do hold a position. But like someone close to me once said,

Due to our foolish acts, we mostly tend to spoil the moments of other people’s life. When you become aware of your mistakes, you might be ready to apologize but that doesn’t bury the lost moments. Life is tricky, it tends to put you in misfortune when you least expect it.

‘To err is to human, to forgive is divine’

According to the above, having the heart to forgive at all times is being equal to God. But sometimes even God gets bounded in a manner that he can’t forgive. We can give excuses for protecting relations, for good purposes. But to do wrong deeds we have to give more than one excuse to support the previous ones. And as the title goes, more than one excuse never sounds appealing. Instead, it sets off an alarm in the minds of the receiving parties and they strengthen up their guard.

Mistakes once in a while, could be expected. But what if they get repeated? Once an excuse will work but repeatedly it won’t. Either you are unaware of it most of the time or you do it deliberately – in both cases, the person on the other end gets fed up with your attitude. They either stop complaining or leave your company forever. Here, definitely, an apology never works out. But you could still give it and then try to make things right, as it was before.

In the context of apologies, they should be given at the right time and place and also in the right manner. Suppose you hit a friend of yours by mistake and no one knows about it. You don’t apologize. The next day he makes a ruckus along with his parents. The whole neighborhood comes to know about this. Then you say sorry but by that time you are ashamed in society. A black dot has been marked which can hardly be wiped off. So things done at the right time have more importance than those that are delayed or even postponed.

“It is a good rule in life never to apologize. The right sort of people don’t want apologies and the wrong sort take a mean advantage of them.” – P. G. Wodehouse

Another relevant fact of apologies is that they aren’t meant for everybody. We should apologize when we know from all points it’s our mistake or we hurt a person. There are gullible people out there who, being sensitive, own up for each and every small mistake. They get hurt by cunning people. But such ruthless people should remember that silent, innocent people will once retaliate and when that happens, they will definitely remember the words of George Bernard Shaw,

“Beware of the man who doesn’t return your blow: he neither forgives you nor allows you to forgive yourself”.

‘Be sure your sin will find you out’. This is the teaching of the Bible. Accepting your mistakes asks for courage, and only then we come to a state of seeking an apology. Believe me, folks, the three words, ‘I am sorry’ creates more impact than, ‘I love you’. People don’t easily own up their mistakes but try to sweep it under the rug. But once it comes out, it stings nastily. The damage was done. We think of reaching up to the stars, but we need to ensure that the rungs of the ladder should never be formed by excuses. As it doesn’t take much time to collapse. Taking advantage of other’s pain and suffering never takes us high but to a level so low that a revival is hardly possible.

Excuse and apology, once in a while, are good. But repeating the same mistake should be discouraged. Life is a beautiful gift to be enjoyed. Nobody knows what happens next. But living in harmony with trust and love makes any person’s life memorable. For this, you never need to go for materialistic requirements. Excuses are easy to make. Blaming others for mistakes is easy, but taking it upon your shoulders is difficult.

An apology should be given by heart, not just for the purpose of giving it. Remember that it’s always for protecting the relation that you accept your mistake. Give priority to love, friendship, then your pride. When you say sorry, the other person feels that you understand that person’s pain and hope for rebuilding the relation. Apologies should be delayed only when you think the time is required to heal the wounds. Always remember the words of Benjamin Franklin,

‘Never ruin an apology with an excuse’.

Check out the related topics on the below categories:

Read Also Quotes on love: trust me not at all or all in all (Part 1)

2020-04-27
Previous Post: Top 5 Evergreen Movies You Should Watch
Next Post: An apology mail to survive the broken relationship